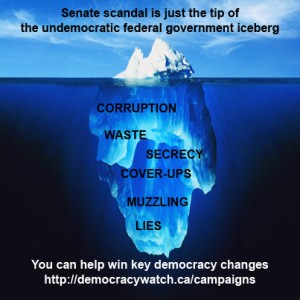 What kind of governments and big businesses do you want to pass on to the next generations in your family – to your kids, nieces, nephews or grandchildren?

Do you want your family to continue to live in a Canada run by the many dishonest, unethical, secretive, unrepresentative and wasteful governments and big businesses we have now?  Your family deserves better, and you can help make things better for them by making a new year resolution right now to help make Canada more democratic and fair.

Just think about how much money people would have saved if governments had made the changes Democracy Watch called for years ago to stop corruption and waste in the Senate, in military spending projects, in Ontario’s power projects and health care companies, in Quebec’s provincial and city construction projects, and to help stop many other similar government boondoggles in every province and territory.

Think about how many unfair decisions governments and big businesses have imposed on us all — often without even asking what we think — decisions that have taken Canada backwards, polluted and killed, or hurt people you know.

The democracy changes Democracy Watch and its allies win for you and yours save you money by making government more honest, efficient and effective – and help save the environment, our public health care system, jobs and lots of other things you care about — and help save you and your family from abuses and ripoffs.

These key changes stop governments from selling out Canada in secret, corrupt deals with big businesses, and stop gouging and other unfair business practices.

Tens of thousands of people, and more than 100 organizations, across Canada have joined the Democracy Watcher Network and helped win key changes for honest, ethical, open, representative and waste-preventing governments and big businesses.

Not only has Democracy Watch won more changes for you than any other group since 1993, it also wins national and local media coverage several times every month for free, coverage that informs millions of Canadians about key problems and issues.  Democracy Watch’s campaigns have been in the news headlines more than 750 times in 2013 – that’s twice a day – and receive media coverage like this year after year.  See details here.

Democracy Watch has very low office costs, doesn’t spend thousands of dollars on fundraising consultants, appeals or advertising, and stays independent by not taking money from governments or big businesses – Democracy Watch is supported only by donations from people like you, and offers you 4 low-cost, easy ways to give.

So please help Democracy Watch win even more democracy for you and yours in 2014 by becoming a supporter today.  See 14 reasons to give for democracy in 2014 set out below – and please send this message on to anyone you think may be interested.

All together we can make Canada the world’s leading democracy! (See details below)

Thank you very much for your support, and happy holidays,

Duff, Tyler, Brad, Marilou, David and Josephine
on behalf of the many volunteers and supporters who make Democracy Watch’s work possible, and successful (thank you very much to all of you!)

P.S. Democracy Watch needs $150,000 to keeping pushing for, and winning, many key democracy and corporate responsibility changes for you in 2014 — please click here to give now, and see 14 reasons to give listed below:

And if you like send an email when you give to: [email protected] and list which campaigns you want your donation to support — you can also help out as a Democracy Watcher in other key ways – for details click here.

A busy 2013, and a very important next year of key democracy changes

This past year was full of scandals involving many federal, provincial and city politicians and government officials, and many big businesses.  Democracy Watch has been there watching for you from 1993 right through 2013 — pushing all governments and big businesses to clean up their act — and Democracy Watch will continue pushing for you through 2014.

You can be sure Democracy Watch makes every dollar you donate count.  Please your support is needed right now here for the following 7 key campaign actions that will cost $75,000 to win in 2014:

Yes, that’s right, Democracy Watch only needs $75,000 to do these 7 very effective campaign actions to win key democracy changes for you.  Why?  Because Democracy Watch is committed to delivering more to you for less.

Democracy Watch uses your donations to support effective complaints, lawsuits, media and letter-writing campaigns that corner politicians and force them to make key, progressive changes, or embarrass themselves publicly by dodging pointed questions or hiding scandals.

Democracy Watch is the only group in Canada pushing for all the 7 more key democracy and corporate responsibility changes listed below, and we need to raise another $75,000 to keep pushing in 2014 for these important changes:

So please help Democracy Watch raise the $150,000 it needs to keeping pushing for a more fair and democratic Canada in 2014 by clicking here to give now.

Thank you very much for your support!

P.P.S. Please pass on this message to anyone you think may be interested – thank you again