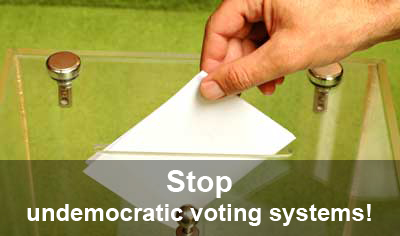 B.C. parties failed to promise to make most of the changes needed ensure democratic politics – will they still make the changes?

Voter turnout up to about 57%, but voting system and other reforms needed as Liberals and NDP both won about 49% of seats with support of only 23.5% of eligible voters, and many accountability loopholes exist

OTTAWA – Today, Democracy Watch called on B.C.’s provincial parties, no matter which party forms the government, to make all the changes needed to ensure democratic politics across the province.

While the final seat totals for each party won’t be known for a couple of weeks after the final count and recounts, and while voter turnout increased to about 57%, voting system and other key democracy and accountability reforms are needed as the Liberals and NDP both won about 48 percent of the seats in the legislature even though they were each supported by only about 40 percent of people who voted (and only 23 percent of total eligible voters).

“The B.C parties promised some key changes but nowhere near enough changes to ensure everyone in B.C. politics will, finally be effectively required to act honestly, ethically, openly, representatively and to prevent waste.” said Conacher. “As with every jurisdiction in Canada, about 100 specific changes are needed in B.C. to ensure democratic good government and democratic politics.”

If the B.C. parties and voters want not just a new but also a democratic government, the top 10 most important changes that need to be made for everyone (politicians, appointees, political staff, public servants) in the provincial and municipal governments, and in every government and government-funded institution across the province, are as follows: