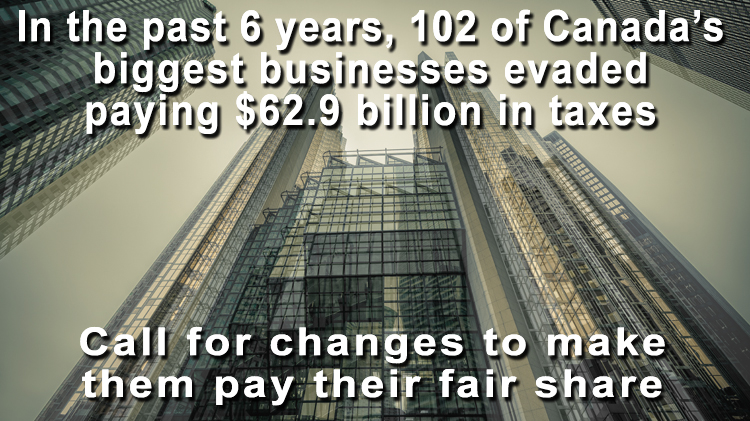 Today, as Prime Minister Trudeau heads to the World Economic Forum in Davos, Switzerland, Democracy Watch revealed that more than 24,000 voters from across Canada have signed its national petition on Change.org calling for key changes to make Canada’s big businesses and Big Banks pay their fair share of taxes.

A special report recently published in the Toronto Star details how Canadian big businesses, especially the Big Banks, have higher profits but pay a lower rate of taxes than ever before.

“Like Scrooge, Canada’s big businesses and banks are trying to keep all the money for themselves, and key changes are needed to close loopholes and match the average tax rate in G7 countries to ensure they pay their fair share of taxes,” said Duff Conacher, Co-founder of Democracy Watch. “As well, Canada’s big banks have gouged their way to record profits again this year, and key changes are needed to stop the gouging and ensure they serve all customers fairly at fair prices.”

As the report says: “Canada’s largest corporations use complex techniques and tax loopholes to reduce their taxes significantly below the official corporate tax rate set by the government.”

As well, the report details how cutting Canada’s corporate tax rate by 16% from 1997 to 2016 has not increased corporate investment in machinery and equipment and in intellectual property like it was supposed to do. Investments by Canada’s big businesses in these areas are still below the 1997 level as a percentage of GDP.

Canada’s Big Banks paid a tax rate of only 16% over the past 6 years — lower than banks in other G7 countries. They are the biggest tax evaders of all Canadian big businesses and, not surprisingly, also the most profitable. They made a record $42.3 billion in profits in 2017.

If Canada’s big businesses and banks paid the official tax rate from 2011-2016, governments across Canada would have almost $64 billion more to spend on making hospitals, schools, housing, public transit and roads better, and on other things Canadians need.

Making Canada’s big businesses and banks pay their fair share in taxes will raise at least $10 billion each year, and billions more if the corporate tax rate is increased to the average rate in G7 countries.

The petition calls on Liberal Finance Minister Morneau to work with federal political parties to work together to make the following three key changes:

Democracy Watch is also calling on Finance Minister Morneau to work with federal political parties to make key changes to stop gouging and abuse by Canada’s big banks. The Big Six Banks made a record $42.3 billion profit in 2017.

As the report also shows, most Canadians don’t benefit from excessive Big Bank profits because they don’t own shares in the banks. As the report says: “more than 80 per cent of Canadian stocks are owned (both directly and indirectly through pensions and mutual funds) by foreigners and the wealthiest households in the country.”

As well, the report reveals that Canada’s Big Banks donate to charities only 10% of what they avoid in taxes – only $2.1 billion donated compared to $23 billion in taxes avoided.