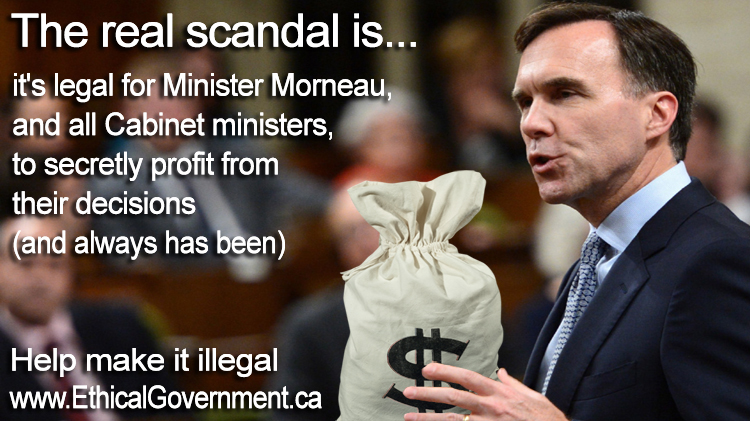 Democracy Watch sent a letter to federal Conflict of Interest and Ethics Commissioner Mario Dion calling for a reconsideration of Ethics Commissioner Mary Dawson’s ruling that none of the sections of the Conflict of Interest Act apply to the fundraising events attended or hosted by Prime Minister Trudeau and/or Cabinet ministers. The letter also calls for an investigation into whether the PM, ministers, parliamentary secretaries or PMO/Cabinet staff violated the Act by giving preferential treatment to, and soliciting donations from, lobbyists who attended the approximately 90 high-priced, exclusive events the Liberals held from January to October 2016, and another 72 events held since April 2017, as well as all the other events held between October 2016 and April 2017 that the Liberals have not disclosed publicly.

Democracy Watch sent a similar letter to federal Commissioner of Lobbying Nancy Bélanger calling for an investigation into whether lobbyists or people connected to lobbying organizations assisted with any of the 162-plus events, which would violate the federal Lobbyists’ Code of Conduct.

As well, both letters call for investigations of similar fundraising events held by the Liberals and other parties going back years. During the decade-long Harper Conservative government several events were investigated but former Ethics Commissioner Dawson and former Lobbying Commissioner Karen Shepherd negligently failed to conduct a broad investigation to hold all politicians and lobbyists accountable for their unethical violations.

Democracy Watch and more than 1,700 Canadians have called on the Auditor General to audit the negligently weak enforcement records of both Commissioner Dawson and Commissioner Shepherd.

Both letters also call on Ethics Commissioner Dion and Lobbying Commissioner Bélanger to recuse themselves from investigating and ruling on the fundraising events, and to assign the investigations to people who are independent from them, because both are biased as they were chosen by the Trudeau Cabinet through a process controlled by the Prime Minister’s Office.

Democracy Watch has challenged the appointment of both commissioners in Federal Court, and the cases will be heard in Ottawa on November 14-15, 2018.

“High-priced, exclusive, invite-only fundraising events attended or hosted by the Prime Minister, Cabinet minister or their staff, and by lobbyists, clearly violate rules in the federal ethics law that prohibit giving preferential treatment to anyone based on their donation, and prohibit soliciting or accepting their donation because of the conflict of interest it causes,” said Duff Conacher, Co-founder of Democracy Watch and Adjunct Professor of Law and Politics at the University of Ottawa. “As the Federal Court of Appeal ruled unanimously in 2009, if a lobbyist assists a politician with fundraising they violate the federal lobbying ethics code.”

“The Trudeau Liberals have shown a clear pattern of breaking the rules that prohibit the PM and Cabinet ministers from being involved in fundraising events involving lobbyists, and prohibit lobbyists from assisting with fundraising, and so a comprehensive investigation is needed of all the events in recent years to find all the Cabinet ministers and lobbyists who have violated the rules,” said Conacher.

“The Ethics Commissioner and Lobbying Commissioner are biased as they were both chosen by the Trudeau Cabinet through a process controlled by the Prime Minister’s Office, and so the investigation of the Liberal fundraising events must be delegated to people who are fully independent from the Cabinet to ensure the integrity of the investigation,” said Conacher. “Prime Minister Trudeau and his Cabinet essentially chose their own ethics and lobbying judges by choosing the commissioners, and so the commissioners shouldn’t be trusted to investigate and rule impartially on the Trudeau Liberals’ fundraising events.”

Democracy Watch has already challenged a ruling by Lobbying Commissioner Bélanger in Federal Court. The case will be heard in Ottawa on November 7, 2018.

As detailed in the letter it has sent to the Ethics Commissioner, Democracy Watch’s position is that, based on the main purpose of the Conflict of Interest Act of preventing conflicts of interests and resolving them in the public interest (as set out in section 3), the events are a violation of one or more (depending on the situation) of the following sections of the Conflict of Interest Act:

As detailed in the letter it has sent to the Lobbying Commissioner, lobbyists or people who are directly associated with a lobbying organization who assist politicians, parties or riding associations with fundraising violate the Integrity and Professionalism Principles, and Rule 6, of the Lobbyists’ Code of Conduct. If they lobby the politician they assisted during or after the fundraising, then they also violate one or more of Rules 7-9 of the Code.

To stop the appointment of weak government watchdogs and law enforcement officers, Democracy Watch has called in its Stop Bad Government Appointments Campaign for establishment of an independent appointments commission to search for and propose a short-list of candidates for all Cabinet appointments. Ontario uses this appointment system to appoint provincial judges, and it is considered to be a world-leading process.