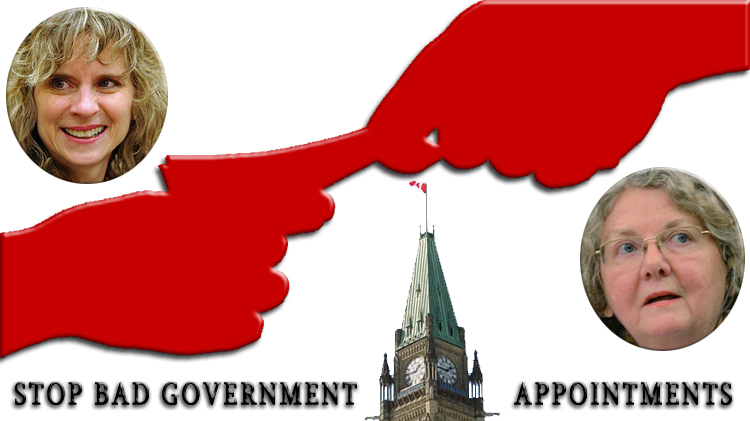 Cases ask Federal Court to overturn the appointments because of Prime Minister’s and Cabinet’s conflicts of interest, and failure to consult with opposition parties

More than 11,000 Canadians have called for key changes to make the Cabinet appointment process actually open, independent and merit-based

OTTAWA – Today, Democracy Watch released details about the lawsuits it filed on Monday in the Federal Court challenging the Trudeau Cabinet’s appointments in December of the new Ethics Commissioner and new Lobbying Commissioner.  For both cases, Democracy Watch is represented by Sebastian Spano.

As well, each of the commissioners’ offices was investigating at least four situations involving Prime Minister Trudeau or other Cabinet ministers when the appointments were made, which means the entire Cabinet was biased and in a conflict of interest because they were choosing people who would judge whether Trudeau or other ministers were involved in situations that could give rise to findings that they were in breach of the Conflict of Interest Act.  The Conflict of Interest Act and PM Trudeau’s code for ministers prohibit ministers from taking part in decisions when they have an opportunity to further their own interests or improperly further another person’s private interests.

“The Trudeau Cabinet failed to consult with opposition party leaders, as required by law, before appointing the new Ethics Commissioner and Lobbying Commissioner, and both commissioners were investigating situations involving Trudeau or other ministers so the Cabinet had a clear conflict of interest when making the appointments of these key democracy watchdogs,” said Duff Conacher, Co-founder of Democracy Watch and Adjunct Professor of Law and Political Science at the University of Ottawa. “Given it is essential that ethics and lobbying watchdogs are independent and impartial, Democracy Watch hopes the court will overturn both appointments and establish high standards to prevent conflicts of interest, and also require meaningful consultation with opposition parties, for all future watchdog appointments.”

“It would be a clear conflict of interest if someone sued Prime Minister Trudeau or a Cabinet minister and the Cabinet chose which judge would hear the case, and it is just as clearly a conflict of interest for the Cabinet to choose the new Ethics Commissioner and Lobbying Commissioner when both are judging whether the PM and other Cabinet ministers are involved in illegal situations,” said Conacher.  “Given both opposition parties complained about the Trudeau Cabinet failing to consult with them before making both appointments, it’s clear the Cabinet failed to consult as required by the laws that set out the rules for the appointments.”

More than 11,000 Canadians have signed a petition supporting Democracy Watch’s Stop Bad Government Appointments Campaign calling on federal parties to work together to change the appointment process for the Ethics Commissioner, and all officers of Parliament and judicial and watchdog positions, to make it actually merit-based and independent from Cabinet, and to prohibit reappointments.

For many appointments, including of the new Ethics Commissioner and Lobbying Commissioner, the Trudeau Cabinet continues to use the same secretive, PMO-controlled, partisan process that past governments used.

At the time of the December 14th Cabinet appointment of Mario Dion as the new Ethics Commissioner, the Ethics Commissioner’s office was investigating at least four situations involving PM Trudeau or other Cabinet ministers, as follows:

On December 20th, Democracy Watch also filed a complaint with the Lobbying Commissioner about the Aga Khan’s gift to PM Trudeau of two trips, and to Liberal MP Seamus O’Regan of one trip, to his Bahamas island.

Democracy Watch’s cases have implications for the ongoing search for, and appointment of, the next federal Information Commissioner, as the Access to Information Act also requires consultation with opposition party leaders before the appointment.  The cases will not affect the search for, and appointment of, the new Chief Electoral Officer or new RCMP Commissioner, as those positions do not require consultation with opposition parties before the appointment is made.

Democracy Watch has another ongoing lawsuit challenging the Ethics Commissioner’s “conflict of interest screens” because they are illegal under the Conflict of Interest Act.  The screens are really smokescreens that hide the fact that Cabinet ministers and top government officials take part in almost all discussions and decisions even if they have a financial interest and could profit from the decision.

Democracy Watch also has another ongoing lawsuit challenging the Ethics Commissioner’s ruling that Bill Morneau didn’t have to sell his shares in his family’s company when he became Finance Minister.