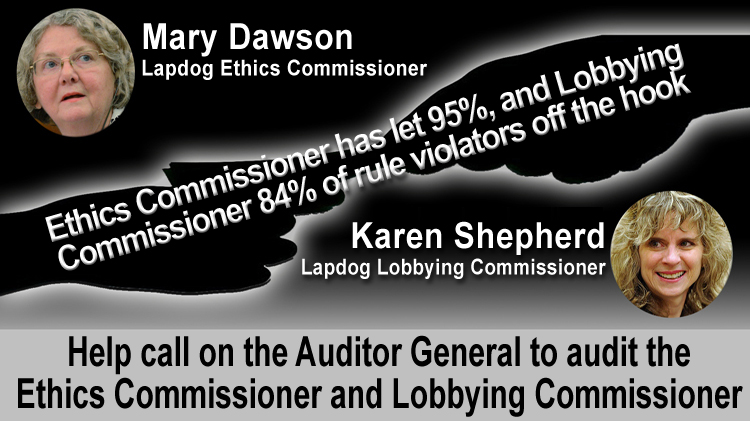 Former Commissioner Karen Shepherd ignored fact that Aga Khan lobbies for his foundation, which is registered to lobby the federal government, and so his gift causes the foundation to violate the Lobbyists’ Code

New Lobbying Commissioner Nancy Bélanger in conflict of interest as she was handpicked by Trudeau through secretive, PMO-controlled process – must refer investigation to person independent of her and all parties or DWatch will also challenge her in court

OTTAWA – Today, Democracy Watch released the application it recently filed in Federal Court challenging the ruling last September by former Lobbying Commissioner Karen Shepherd that the Aga Khan is not covered by the federal lobbying law or code, and so his Bahamas trip gift to Prime Minister Trudeau was legal.

Although Commissioner Shepherd’s ruling was made last September, it didn’t become public until CBC reported on December 22nd that someone had complained to the Lobbying Commissioner about the Aga Khan’s trip gift to Trudeau sometime in the past year, and had received the Commissioner’s letter containing the ruling on September 21st. The letter stated even though the Aga Khan is chair of the board of the Aga Khan Foundation, which is registered to lobby the federal government, because he wasn’t paid to lobby for them the Lobbying Act (“Act”) and Lobbyists’ Code of Conduct (“Lobbyists’ Code”) do not apply to him.

The error of the Commissioner’s ruling is that the Aga Khan lobbies the Prime Minister and other federal government institutions and officials and politicians not for himself but for the Aga Khan Foundation. As well, as head of the board of the Foundation, he is legally bound to advance the interests of the Foundation, and likely at least some of his expenses are covered by the Foundation. As a result, whether he is paid or not, he should be considered by the Commissioner to be covered by the Act and the Lobbyists’ Code and his gift to the Prime Minister should have resulted in a ruling that the Foundation violated the rules in the Code that prohibit such gifts.

“Democracy Watch is challenging the Lobbying Commissioner’s ruling in court because it is legally incorrect, violates the spirit and purpose of the Lobbyists’ Code of Conduct, and opens up a huge loophole that big businesses and other organizations will exploit by having their unregistered board members or staff do favours for, and give gifts to, politicians and government officials they are lobbying as a way of unethically influencing their policy making decisions,” said Duff Conacher, Co-founder of Democracy Watch. “Democracy Watch is also challenging Commissioner Shepherd’s ruling because she was on a six-month, sole-source, renewable contract handed to her by the Trudeau Cabinet at the time she made the ruling, and so she lacked independence and was biased in favour of the Cabinet.”

Democracy Watch requested in its complaint letter that that the complaint be investigated and ruled on by someone completely independent of Commissioner Bélanger because she was handpicked by Prime Minister Trudeau through a secretive, PMO-controlled process and is therefore biased. In a separate court case, Democracy Watch is challenging Trudeau’s appointment of Commissioner Bélanger, and Democracy Watch also has an ongoing campaign to make the Cabinet appointment process actually independent, open and merit-based.

“An independent investigation about whether the Aga Khan a year ago violated the lobbyist ethics code by giving the trip gift to PM Trudeau and MP O’Regan should have been initiated a year ago,” said Duff Conacher, Co-founder of Democracy Watch. “Given that she was handpicked by Trudeau through a secretive, PMO-controlled process, the new Lobbying Commissioner is in a conflict of interest and so must delegate the investigation to a person who is independent of her and all federal political parties.”

“Lobbying Commissioner Shepherd went out with a whimper by issuing only one public ruling in the past two years since the Liberals were elected, and she also let almost everyone off since 2008 so the Auditor General should also audit her negligently weak record,” said Conacher.

The Conflict of Interest Act and the Lobbying Act and Lobbyists’ Code are required to be reviewed by the House Ethics Committee in 2018. The Conservatives rejected many key proposed changes when the laws were last reviewed by the Committee. See details about the changes needed to close loopholes and strengthen enforcement and penalties for the Lobbying Act and Lobbyists’ Code of Conduct here.