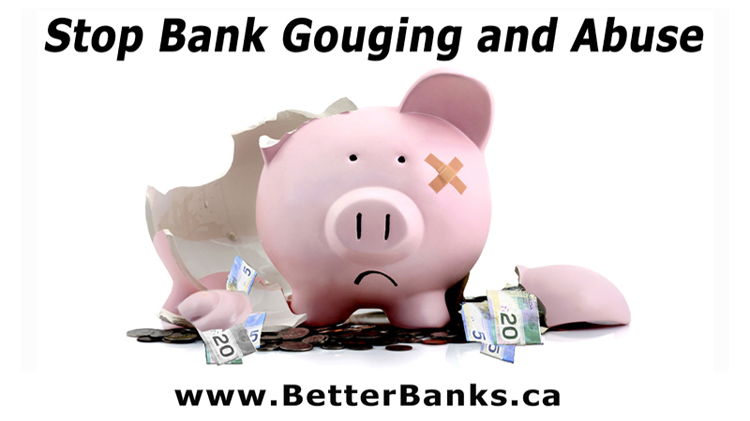 Ignores 60,000+ calling for creation of financial consumer group, changing FCAC and Ombudsman from lapdogs into watchdogs, audits of profits and lending, and increased penalties

OTTAWA – Today, Democracy Watch called on the Finance Minister to make the key changes needed to stop gouging and abuse by Canada’s big banks, as called for by its Bank Accountability letter-writing campaign that more than 60,000 Canadians have supported and Change.org petition that more than 32,000 people have signed.

The call comes as Canada’s Big 6 Banks have once again reported record profits based on gouging Canadians – the 8th year in a row, and at $45 billion total more than double their 2010 profits – in part by firing thousands of people, shifting jobs overseas (or using temporary foreign workers), cutting services, and hiking fees and credit card interest rates. The banks also hiked annual bonuses to $15.2 billion (6% higher than last year).

The call also comes as Finance Minister Bill Morneau’s budget Bill C-86 has been shoved through Parliament and become law. The Bill changes dozens of laws, including the Bank Act and other financial sector laws, but didn’t make any changes that will stop big bank gouging, and didn’t make enough changes to stop unfair treatment and abuse of consumers and big bank employees.

“The federal Conservatives and Liberals watched Canada’s big banks hike fees and keep credit card interest rates up to gouge Canadians and more than double their profits since 2010 to the highest levels of banks world-wide, and the Liberals should finally take action like Australia has to audit the banks’ excessive profits and gouging and abuse of consumers,” said Duff Conacher, Co-founder of Democracy Watch.

Australia’s Royal Commission recently released its Interim Report, which found that banks encouraged gouging and abuse of customers based on pure “greed.”’

Meanwhile, Canada’s Financial Consumer Agency of Canada (FCAC), which has been a lapdog since it was created in 2001, released its own report last March that most people view as a whitewash cover-up of wrongdoing in the big banks, in part because the FCAC announced its audit in advance. (See FCAC Backgrounder below)

“The federal Liberals know that because the big banks control more than 90 percent of the banking market in Canada they can hike fees and interest rates whenever they want, and yet they have done little to protect 30 million bank customers from gouging and abuse,” said Conacher. “Every dollar of excessive profit for the banks, and every person and business the banks unjustifiably cut off from credit, costs the Canadian economy because it means that the banks are overcharging for their essential services and loans, and choking off spending and job creation.” (See Canada’s Big Banks Backgrounder below)

“At little or no cost to the federal government or the financial services industry, financial consumers across Canada can be given a very easy way to band together to help and protect themselves through joining a national financial consumer organization they fund and run – all the federal government has to do is require the banks and insurance companies to inform their customers about the group,” said Conacher.

Democracy Watch’s September 2017 submission to Finance Canada’s review of the Bank Act, and the letter-writing campaign and petition call for the following key changes to stop big bank gouging and abuse:

The only changes that Bill C-86 make from the above list are that the maximum fine has been increased from $500,000 to $1 million for a person who violates the law, and $10 million for a bank that breaks the law. This would be a meaningful change except that the FCAC is such a lapdog that there is only a 1 in a 1,000 chance of ever being caught violating the law, and an equally small chance of being fined. Bill C-86 gives the FCAC more powers, but it has never used the powers that it has had since 2003. The FCAC has only prosecuted a few financial institutions in the past 15 years, none of which were big banks (See FCAC Backgrounder below).

“The Financial Consumer Agency of Canada and the Ombudsman will continue to be ineffective until the federal Liberals give them key powers and requires them to use those powers to audit banks and other financial institutions regularly and to penalize every violation with a high fine and public naming and shaming,” said Conacher.

According to Finance Canada, despite the lowering of barriers to competition 15 years ago under a World Trade Organization agreement, Canada’s big banks control 93 per cent of all banking assets, and are more profitable than comparable banks in other countries, and than small banks in Canada, and Canada’s corporate sector overall. The big banks control of the market essentially allows them to gouge and abuse customers with excessive fees, high interest rates (especially on credit cards). As a result, government regulation is needed to stop them.

The federal government bailed out the banks with $114 billion in mortgage purchases during the financial industry fraud crisis in 2009. It hasn’t required the banks to do anything in return for that bailout, or for the protections from foreign competition that the government gave the banks in 1967, and continues to maintain.

According to the Bank of Canada, the banks currently have about $1.3 trillion in business loans. That makes the so-called Canadian Business Growth Fund of (eventually) $1 billion that the Liberal government announced last March a sad joke as it will amount to only 0.1% of total bank lending. Given that the fund is a joint initiative of Finance Minister Morneau and the big banks, it is clear that the federal Liberals are trying to fool Canadians into applauding the banks for this largely meaningless initiative.

“Instead of helping the banks promote a very small loan fund to help grow entrepreneurial businesses, the federal government should do what the U.S. government did 40 years ago and pass a community reinvestment law requiring the banks to disclose detailed information that will allow the public to judge whether they are discriminating against borrowers such as women entrepreneurs, and requiring the banks to take corrective action whenever discrimination is found,” said Conacher.

The Financial Consumer Agency of Canada (FCAC) has a very weak enforcement record since it was created in 2003. It has made only 125 compliance rulings, is prohibited from naming a law-violating bank unless it prosecutes the bank, and it has only prosecuted 2 banks (neither of them a Big Six bank). The FCAC not only lacks resources by comparison to the similar watchdog agencies in Britain and the U.S., it is also clearly a lapdog compared to these two other agencies.

According to an article by Reuter in March 2017, the FCAC had issued fines totaling just $1.7 million since 2001 (the maximum fine allowed under the Bank Act is $500,000, which is meaningless to the big banks who each make more than $10 billion in revenue annually). Since 2013 when it was created, Britain’s FCA has already issued penalties totalling more than US$3 billion, and since 2011 when it was created, the U.S. CFPB has already imposed fines of more than US$5 billion.