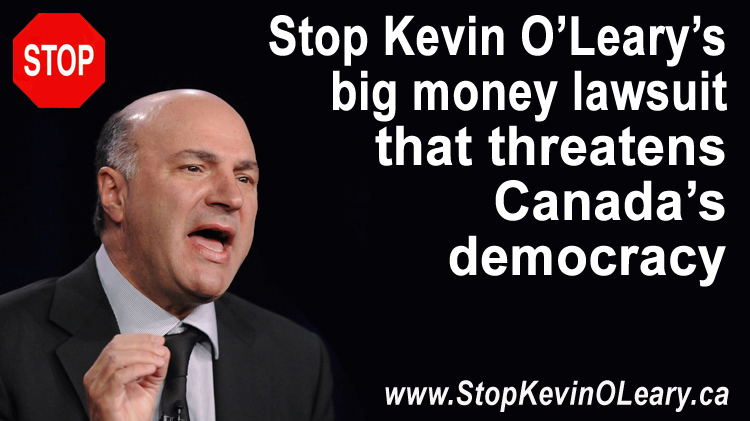 Democracy Watch needs your support now for a very important initiative – stopping Kevin O’Leary’s lawsuit that is aimed at removing limits on political donations in Canada!

A self-proclaimed billionaire, O’Leary ran for the Conservative Party leadership in 2017 and spent $532,000 more than he raised in donations before he dropped out of the race when it became clear he wasn’t going to win.

He has tried raising money to pay off his debt but he still owes $430,000.  He wants to pay off that debt by having one of his businesses donate $430,000 to himself – but that is illegal because Canada limits political donations.

So Kevin O’Leary is challenging Canada’s donation limits in court.  If he wins, Canadian politics will return to the bad old days when wealthy people used money to buy influence over parties and candidates in leadership races and elections.

It will also make Canada much more like the U.S. where 50% of Senators and 35% of House politicians are millionaires because they are allowed to donate as much as they want to their own election campaigns, which gives them a big advantage in elections.

In fact, Canada’s donation limits are too high, not to low – anyone can donate $3,200 each year to each party and its candidates.  That’s much more than an average voter can afford.

Democracy Watch is intervening to call on the court to reject O’Leary’s court case because it threatens donation limits – a key safeguard of Canada’s democracy.

We need your support to pay the costs of intervening in the case, and for our ongoing campaign to stop big money in politics across Canada!

Please help by making your donation now to the Stop Kevin O’Leary’s Lawsuit Fund, and by Sharing and Tweeting this page.

Together we can stop Kevin O’Leary’s threat to Canada’s democracy.

P.S. Please also click here to send a letter to your federal and provincial politicians calling for stronger rules, enforcement and penalties to stop big money interests in politics from damaging Canada more than they already have.

P.P.S. Even $5 a month will help stop Kevin O’Leary’s court case, and help win changes to stop big money in politics across Canada.

Donate by credit card or e-transfer

or Donate by Paypal

You can also donate by cheque – please make out your cheque to “Democracy Watch” and note it’s for the “Stop Kevin O’Leary’s Lawsuit Fund” and send it to: