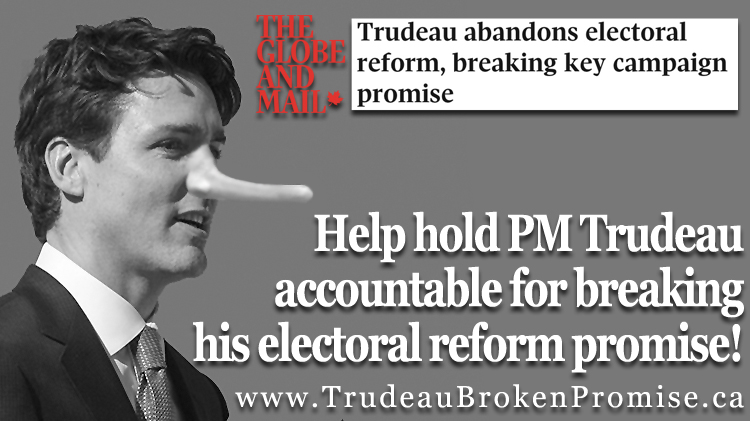 Democracy Watch has filed an official complaint with the Commissioner of Canada Elections alleging that Prime Minister Trudeau violated Canada’s election law during the 2015 federal election by trying to get voters to vote for Liberal candidates by baiting them with the false promise that “2015 election will be the last federal election using first-past-the-post” voting system.

Your support is needed so Democracy Watch can continue this campaign to push the Commissioner to investigate, and prosecute, Prime Minister Trudeau for his false promise, and to continue pushing for electoral reform through the 2019 federal election.

Please help by making your donation now to the Prime Minister Trudeau Electoral Reform Accountability Fund, and by Sharing and Tweeting this page.

You can also help by sending a letter to the Commissioner calling for an investigation of Trudeau’s broken promise here.

Latest News on the Case and Campaign

With your support, Democracy Watch will ensure Prime Minister Trudeau is prosecuted for baiting voters with his false electoral reform election promise