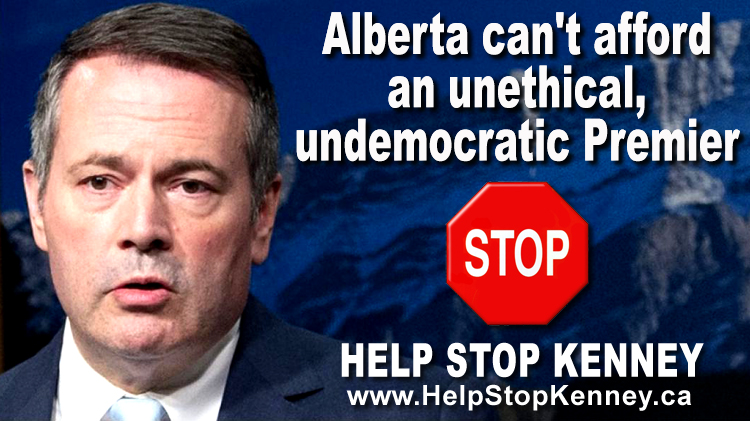 Democracy Watch is leading the way in challenging Jason Kenney’s many undemocratic, unethical actions – from firing the Election Commissioner who was investigating Kenney’s United Conservative Party (UCP) to handing government jobs to his crony friends.

Please help by making your donation now to the Help Stop Kenney Fund, and by Sharing and Tweeting this page.

Since the UCP won the Alberta election in May 2019, Premier Jason Kenney has done many things that even many UCP members are concerned about – and that have to be stopped to ensure a democratic, ethical Alberta government.

Once again, as it has for 25 years, challenging the federal government, and challenging governments across Canada, Democracy Watch is leading the way in challenging Premier Kenney’s undemocratic, unethical actions.

See the list below of the complaints and petitions Democracy Watch has already filed challenging Premier Kenney, his Cabinet ministers, and his friends.

Democracy Watch will continue to file complaints, and challenge any bad rulings in court.

We need your help to pay the costs for pursuing these complaints and lawsuits to ensure key democratic, ethical government rules are strictly and strongly enforced in Alberta – please donate now and Share and Tweet this page to spread the word to anyone you think may be interested in supporting these lawsuits.

P.S. Please also click here to send a letter to your federal and provincial politicians calling for stronger rules, enforcement and penalties to stop unethical actions and decisions by politicians, government officials and lobbyists.

Your support is needed for the following Stop Kenney complaints and petitions:

With your support, Democracy Watch will stop Premier Kenney’s many undemocratic, unethical actions

Donate by credit card or e-transfer

or Donate by Paypal

You can also donate by cheque – please make out your cheque to “Democracy Watch” and note it’s for the “Help Stop Kenney Fund” and send it to:
Democracy Watch
P.O. Box 821, Stn. B
Ottawa, Ontario, K1P 5P9